At the time of writing, there's no Universal Binary version of DP5 which will allow it to run natively on Intel Macs, although one is very much in the pipeline, and might well be available as you read this. Some users have reported success in running DP5 on Intel Macs using Rosetta, Apple's technology for supporting Power PC code on the new processor, but with an inevitable impact on raw performance and restricted compatibility with third-party plug-ins and drivers.

MOTU, incidentally, make no claim whatsoever for Rosetta compatibility, and users experiment with this very much at their own risk! One thing that has always been in Digital Performer 's favour is its copy-protection scheme — or lack of it! Although MOTU make use of the iLok dongle for copy-protecting their range of software instruments, DP has never been saddled with this. A degree of copy-protection is provided as part of the installation process, when users have to enter a key code printed in the manual whilst the installation disc is still in the Mac's drive — presumably some sort of cross-checking occurs, but no Internet connection is required or challenge-and-response process entered into.

It's an approach which DP users seem to appreciate and which is very easy to live with. Additionally, DP5 can use multiple audio hardware drivers simultaneously without having to rely on OS X's sometimes troublesome Device Aggregation facilities. This can be worth its weight in gold if you like to use PCI and Firewire interfaces at the same time, for example.

DP5 supports DAE 6. DP 's capabilities are as extensive as you'd expect from a mature, heavyweight sequencing application, and difficult to summarise — but here goes. MIDI capabilities are formidable, offering an extensive range of approaches to recording and editing, with near sample-accurate playback of software instruments and sub-millisecond timing accuracy for conventional MIDI hardware when you use one of MOTU's own MIDI interfaces.

Audio can be played back and recorded at sample rates and bit depths of up to kHz, bit, though only at one sample rate and resolution can be used at any one time.

Channel formats from mono and stereo, through 5. Destructive audio editing is provided for by a dedicated Waveform Editor, which in DP5 can be locked to the main transport. DP 's mixing is based around a bit floating-point audio engine, allowing for astronomical headroom in the digital domain, a range of surround panners is provided for different applications, and all mixing features are fully automatable.

Timing cues can be incorporated into printable music scores, too. As well as these fundamental features, DP has some more unusual capabilities. For example, Beat Detection analyses all audio for rhythmic and transient content, which then facilitates audio editing, quantising, time-compression and expansion, and audio groove extraction. There's a dedicated 'performance-oriented looped audio recorder' that records audio into RAM and comes into its own for tracking overdubs, solos, backing vocals and percussion stacks.

And pitch automation, introduced in version 4. DP5 gets a reworked version of the MOTU Audio System to help it run better on single-processor Macs, and improve user-interface responsiveness for everyone. Entire tracks can now be taken on or off-line at a single stroke, to assist with managing processing resources. DP now easily handles virtual instrument plug-ins that have multiple outputs such as multi-channel samplers and drum modules. When instantiated, audio streams from these plug-ins automatically appear amongst input choices for other tracks.

As described in the main text, DP5 has a hugely improved way of configuring and controlling input monitoring of audio tracks. This is a much-requested feature. Tracks of all kinds can now be visually grouped together in the Tracks window, Sequence Editor and Mixing Board, and hidden or shown en masse. A new, highly configurable, window which can display levels for almost any part of the mixing environment — hardware inputs and outputs, along with DP tracks, busses and auxes. Four new options in the Tools palette provide some sophisticated ways of working with soundbites.

For those working with music and audio for film, DP can now overlay Streamers, Punches and Flutters on to Quicktime movies running in the Movie window, and can communicate them to compatible third-party video hardware too. Hand in hand with this go enhanced Conductor track facilities, including pattern, tacet and 'visual' clicks to complement the wide range of available click sounds and options.

Soundbites can now have gain non-destructively applied, and volume automation can be linked to the soundbite rather than the track, so that it 'travels' with the soundbite if it's ever moved or duplicated. If you haven't experienced Digital Performer before, the first thing you'll notice is the unique appearance of many of the editing windows, their title bars positively festooned with extra buttons and gadgets. There's certainly a concession towards OS X's bright, airy look, but there's still plenty which is highly idiosyncratic.

For example, nowhere can be found OS X's red, yellow and green title-bar buttons for closing, minimising and maximising a window. Those functions are there, but under a different guise. Additionally, many windows have a title-bar mini-menu which provides specific features not available in the main menus. Only in a few places do a few inconsistencies seem a bit daft. One is the differing appearance of play-enable indicators across differing windows.

In the Tracks window they're blue, in the Sequencer Editor green, and in the Mixing Board non-existent! It's a similar story with input monitoring buttons. When you get used to these few quirks, DP 's non-standard user interface is straightforward and perfectly friendly, but doubtless for many it will cause a few moments of head-scratching at first. There are some other interesting features of the user interface. DP doesn't make use of two-button mice, so there's no right-click contextual menu functionality. This is fine in practice, but I can't help thinking that it would bring an improvement in ease of use for some aspects of editing.

There is, however, support for mouse scroll wheels, which can be used to change the position of on-screen knobs and sliders, or adjust the numbers in value boxes when you're pointing at them. 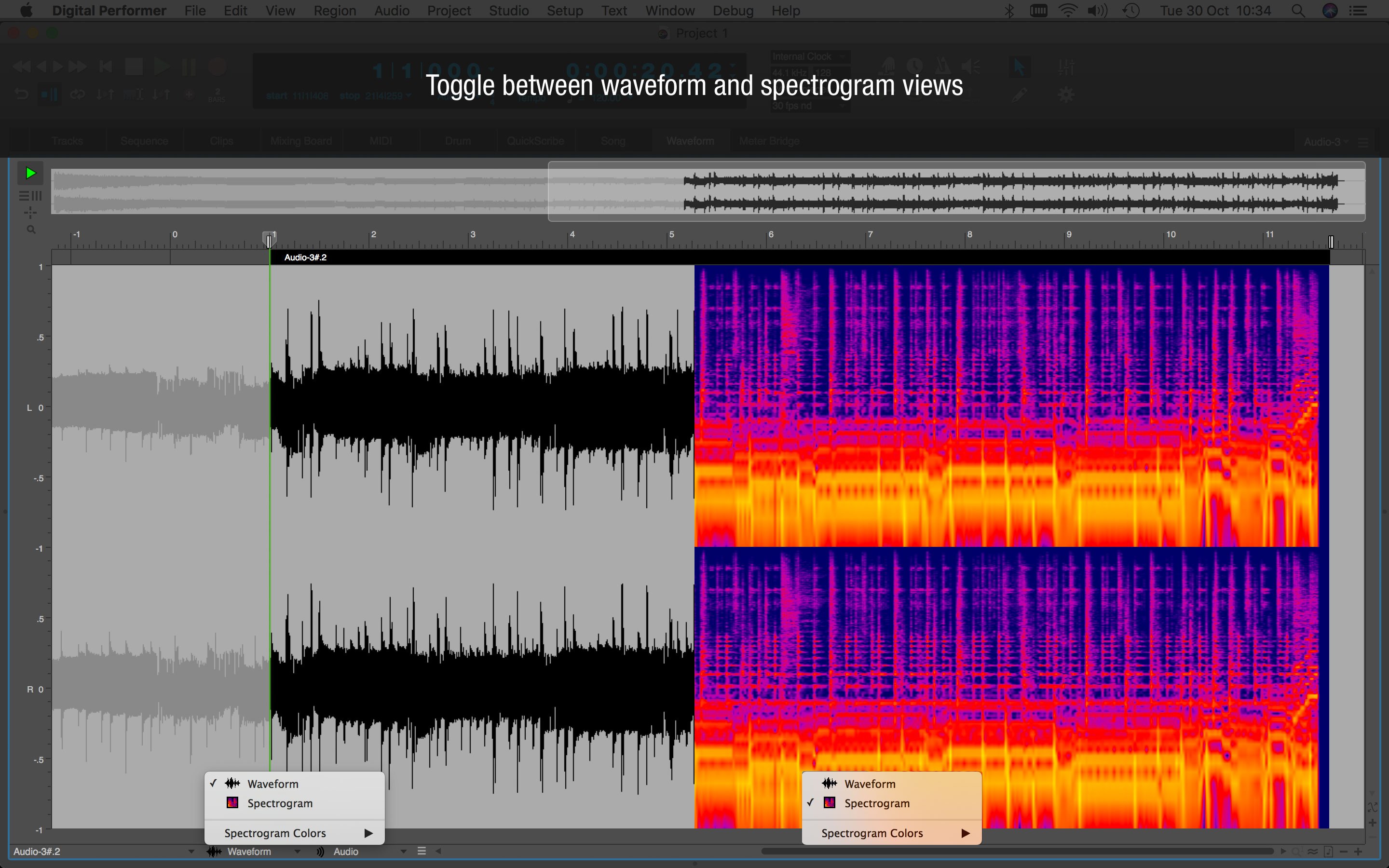 This is a 'mothership' of a window that can contain one or many of DP 's other windows, providing a flexible, organised approach to organising screen use and setting up your perfect workspace. Key editing windows, such as those using a 'timeline' approach, open up in a wide central area, whilst smaller windows are accommodated in 'side bars' on the left and right. The exact width and height of each 'pane' in the Consolidated Window is not preset, and can be adjusted by simply dragging horizontal and vertical dividers, so you can have exactly the setup you want whether you're using a Powerbook display or a inch Cinema Display.

Working hand in hand with these windows is a Tools palette that can either attach itself automatically to the Consolidated Window or other frontmost editing window, or be free-floating. What tools are available at any one time depend on what you're doing, but the full complement includes data and time range-selection tools, along with pencil and reshape tools.

These are used for writing and reshaping all kinds of data, but they have sophisticated shape and waveform drawing modes for working with MIDI controller data and automation. There's also a 'pattern tool' which speeds up writing complex rhythm patterns especially in the Drum Editor , the obligatory Zoom, and also audio Scrub, Loop, Mute, Scissors, and four specialist tools for performing complex edits to soundbites Trim, Roll, Slip and Slide.

Tools can be selected with the mouse, or temporarily by holding down single-key shortcuts. Talking of keyboard shortcuts, Digital Performer uses an open-ended approach that allows virtually any aspect of the application to be controlled with up to two keyboard shortcuts or a MIDI message. This is configured in a dedicated Commands window which has a fully fledged text search facility, so zoning in on a specific feature and assigning a shortcut to it is quick and easy.

What's always been striking about Digital Performer — and version 5 is no exception — is the sheer flexibility of the environment, and the fact that many recording, editing and mixing tasks can be achieved in different ways. DP absolutely does not channel you into one way of working, but whilst this can be a breath of fresh air for experienced sequencer users who know what they want to achieve and how they want to achieve it, it's arguably less straightforward for absolute beginners, for whom the possibilities and the page manual!

Help is at hand, though — a range of on-line and Quicktime-based training materials is already available from a number of companies.


Most other features of DP stay the same, but become subject to any extra capabilities or restrictions imposed by DAE. You get a different Audio Performance window which monitors processing hit on your HD or Accel cards, surround mixing and routing are not available, Rewire is not supported, and RTAS instruments with multiple outputs can't make use of them. In all other respects, though, it seems as if DP5 has ironed out some of the DAE difficulties that were apparent in version 4. Digital Performer 5 records and plays back audio files in the split-channel Sound Designer II format — an uncompressed format that has many similarities with the more familiar AIFF and WAV, and which carries information such as time stamps, loops and so on.

This provides a flexible approach to handling conventional mono and stereo audio right up to the multi-channel surround formats, as DP just applies suffixes such as '. L', '. R', '. Lfe' or '. There's no video for Digital Performer 4 yet. Please contribute to MR and add a video now! It provides a comprehensive environment for editing, arranging, mixing, processing and mastering multitrack audio projects for a wide variety of applications.

Digital Performer allows you to simultaneously record and playback multiple tracks of digital audio and MIDI data in a totally integrated, creative environment.

Themes such as "Classic" and "Carbon Fiber" span a wide range of lightness to darkness, while others, such as "Savannah," provide distinct hues that will appeal to users who prefer color. Power users with basic Photoshop skills can create their own themes by duplicating and modifying the factory-supplied themes, which are stored as standard. This gives users the flexibility to modify DP's look and feel without worrying that they are "hacking" the app in ways that might cause it to malfunction.

Users can also fine-tune waveform display colors and the color of audio level meters to carefully match their favorite theme.